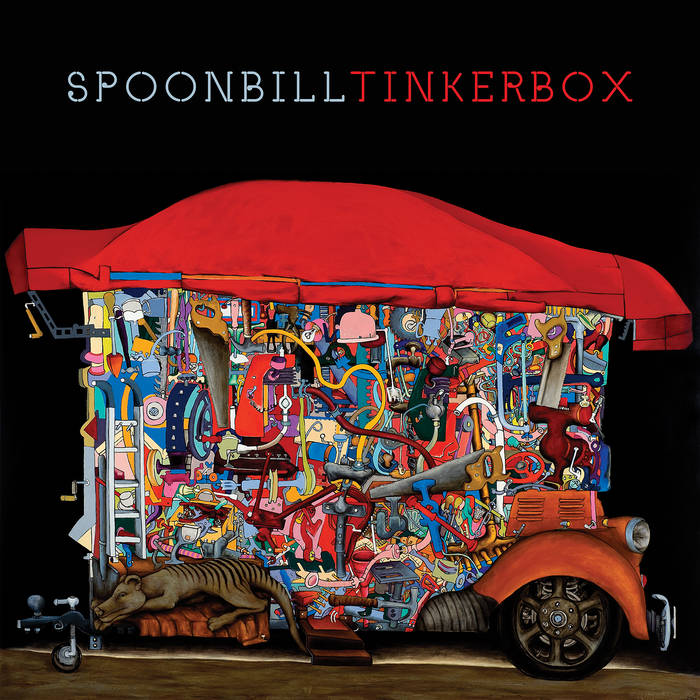 Tinkerbox has been crafted as a eclectic but refined listening album that features a vast array of 16 musicians, recorded in many studios around the world from Canada to India and Australia.The live instrumentation has been forensically sculpted with synthesised tones and foley recordings to achieve a dynamic spectrum of tonality that provides the listener with an evocative cerebral experience.

Spoonbill’s latest album is like nothing he has done before - yet it also seems like a natural evolution of his signature quirky glitch-funk, genre-defying style. The album glides from beat-less sound art, to dub infused rhythms, exotic melodia and downbeat grooves. Pretty and uplifting jazz inspired crescendos are juxtaposed with quirky idiosyncrasies but also spiked with a smattering of dark moments. As the name suggests, this is a collection of tracks that he has been tinkering with for many years, recording artists as he has toured extensively, weaving and manipulating the vast array of recorded tones into refreshing new compositions. At times the music pulls back to reveal a cinematic sensibility, reflective at time, often playful and endlessly inventive.

After a series of high energy EP’s (Airborne, Astro Archepeligo & Boca Fiesta), this is Spoonbill’s first full-length album in 6 years since Zoomorphic (2009). Not that he’s been resting on his laurels, having released three EP’s & a stack of remixes in that time featuring his trademark funked-up ‘wonkadelic’ bass music, as well as creating sound design for video games and TV and touring the world.

Spoonbill aka Melbourne born Jim Moynihan is one Australia’s most unique electronic musicians carving out a signature sound that has influenced the glitch hop, broken beat & bass music genres in the electronic music scene over the last ten years. This album shines a new light on one of the pioneers of the Australian scene, adding a new feather to his already plumage-laden cap.
The cover art for Tinkerbox was painted by the artist’s father; Daniel Moynihan and is titled ‘Tinker van’. It was inspired by a true character who travelled rural Victoria, moving from town to town fixing anything and everything people asked of him. The albums title draws inspiration from this gypsy fixit man’s travelling caravan as well as Spoonbill’s own hands on experience building his own rammed earth house and recording studio in the hills outside of Melbourne, Victoria where he produced, mixed and mastered the album.

This collection of tracks represent the voyages of the mythical Tinkerbox as the densely laden caravan travels across the rolling fields of sonic landscapes pioneering new territories along the way.